December 28, 2017 Comments Off on The Body’s Fuel Sources performance  Like

This is an excerpt from Endurance Sports Nutrition, Third Edition by Suzanne Girard Eberle.

Our ability to run, bicycle, ski, swim, and row hinges on the capacity of the body to extract energy from ingested food. As potential fuel sources, the carbohydrate, fat, and protein in the foods that you eat follow different metabolic paths in the body, but they all ultimately yield water, carbon dioxide, and a chemical energy called adenosine triphosphate (ATP). Think of ATP molecules as high-energy compounds or batteries that store energy. Anytime you need energy—to breathe, to tie your shoes, or to cycle 100 miles (160 km)—your body uses ATP molecules. ATP, in fact, is the only molecule able to provide energy to muscle fibers to power muscle contractions. Creatine phosphate (CP), like ATP, is also stored in small amounts within cells. It’s another high-energy compound that can be rapidly mobilized to help fuel short, explosive efforts. To sustain physical activity, however, cells must constantly replenish both CP and ATP.

Our daily food choices resupply the potential energy, or fuel, that the body requires to continue to function normally. This energy takes three forms: carbohydrate, fat, and protein. (See table 2.1, Estimated Energy Stores in Humans.) The body can store some of these fuels in a form that offers muscles an immediate source of energy. Carbohydrates, such as sugar and starch, for example, are readily broken down into glucose, the body’s principal energy source. Glucose can be used immediately as fuel, or can be sent to the liver and muscles and stored as glycogen. During exercise, muscle glycogen is converted back into glucose, which only the muscle fibers can use as fuel. The liver converts its glycogen back into glucose, too; however, it’s released directly into the bloodstream to maintain your blood sugar (blood glucose) level. During exercise, your muscles pick up some of this glucose and use it in addition to their own private glycogen stores. Blood glucose also serves as the most significant source of energy for the brain, both at rest and during exercise. The body constantly uses and replenishes its glycogen stores. The carbohydrate content of your diet and the type and amount of training that you undertake influence the size of your glycogen stores. 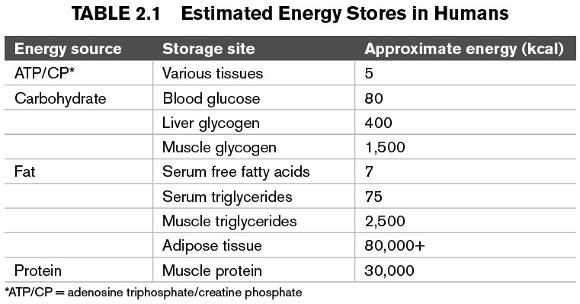 The capacity of your body to store muscle and liver glycogen, however, is limited to approximately 1,800 to 2,000 calories worth of energy, or enough fuel for 90 to 120 minutes of continuous, vigorous activity. If you’ve ever hit the wall while exercising, you know what muscle glycogen depletion feels like. As we exercise, our muscle glycogen reserves continually decease, and blood glucose plays an increasingly greater role in meeting the body’s energy demands. To keep up with this greatly elevated demand for glucose, liver glycogen stores become rapidly depleted. When the liver is out of glycogen, you’ll “bonk” as your blood glucose level dips too low, and the resulting hypoglycemia (low blood sugar) will further slow you down. Foods that you eat or drink during exercise that supply carbohydrate can help delay the depletion of muscle glycogen and prevent hypoglycemia.
Fat is the body’s most concentrated source of energy, providing more than twice as much potential energy as carbohydrate or protein (9 calories per gram versus 4 calories each per gram). During exercise, stored fat in the body (in the form of triglycerides in adipose or fat tissue) is broken down into fatty acids. These fatty acids are transported through the blood to muscles for fuel. This process occurs relatively slowly as compared with the mobilization of carbohydrate for fuel. Fat is also stored within muscle fibers, where it can be more easily accessed during exercise. Unlike your glycogen stores, which are limited, body fat is a virtually unlimited source of energy for athletes. Even those who are lean and mean have enough fat stored in muscle fibers and fat cells to supply up to 100,000 calories—enough for over 100 hours of marathon running!
Fat is a more efficient fuel per unit of weight than carbohydrate. Carbohydrate must be stored along with water. Our weight would double if we stored the same amount of energy as glycogen (plus the water that glycogen holds) that we store as body fat. Most of us have sufficient energy stores of fat (adipose tissue or body fat), plus the body readily converts and stores excess calories from any source (fat, carbohydrate, or protein) as body fat. In order for fat to fuel exercise, however, sufficient oxygen must be simultaneously consumed. The second part of this chapter briefly explains how pace or intensity, as well as the length of time that you exercise, affects the body’s ability to use fat as fuel.
As for protein, our bodies don’t maintain official reserves for use as fuel. Rather, protein is used to build, maintain, and repair body tissues, as well as to synthesize important enzymes and hormones. Under ordinary circumstances, protein meets only 5 percent of the body’s energy needs. In some situations, however, such as when we eat too few calories daily or not enough carbohydrate, as well as during latter stages of endurance exercise, when glycogen reserves are depleted, skeletal muscle is broken down and used as fuel. This sacrifice is necessary to access certain amino acids (the building blocks of protein) that can be converted into glucose. Remember, your brain also needs a constant, steady supply of glucose to function optimally.
Fuel Metabolism and Endurance Exercise