December 29, 2017 Comments Off on A low-carbohydrate, ketogenic diet to treat type 2 diabetes DIABETES  Like

The low-carbohydrate, ketogenic diet (LCKD) may be effective for improving glycemia and reducing medications in patients with type 2 diabetes.

From an outpatient clinic, we recruited 28 overweight participants with type 2 diabetes for a 16-week single-arm pilot diet intervention trial. We provided LCKD counseling, with an initial goal of <20 g carbohydrate/day, while reducing diabetes medication dosages at diet initiation. Participants returned every other week for measurements, counseling, and further medication adjustment. The primary outcome was hemoglobin A1c.

The LCKD improved glycemic control in patients with type 2 diabetes such that diabetes medications were discontinued or reduced in most participants. Because the LCKD can be very effective at lowering blood glucose, patients on diabetes medication who use this diet should be under close medical supervision or capable of adjusting their medication.

Prior to the advent of exogenous insulin for the treatment of diabetes mellitus in the 1920’s, the mainstay of therapy was dietary modification. Diet recommendations in that era were aimed at controlling glycemia (actually, glycosuria) and were dramatically different from current low-fat, high-carbohydrate dietary recommendations for patients with diabetes [1,2]. For example, the Dr. Elliot Joslin Diabetic Diet in 1923 consisted of “meats, poultry, game, fish, clear soups, gelatin, eggs, butter, olive oil, coffee, tea” and contained approximately 5% of energy from carbohydrates, 20% from protein, and 75% from fat [3]. A similar diet was advocated by Dr. Frederick Allen of the same era [4].

The purpose of this study was to evaluate the effects of a low-carbohydrate, ketogenic diet (LCKD) in overweight and obese patients with type 2 diabetes over 16 weeks. Specifically, we wanted to learn the diet’s effects on glycemia and diabetes medication use in outpatients who prepared (or bought) their own meals. In a previous article, we reported the results observed in 7 individuals [10]; this report includes data from those 7 individuals along with data from additional participants enrolled subsequently.

At the first visit, participants were instructed how to follow the LCKD as individuals or in small groups, with an initial goal of ≤20 g carbohydrate per day. Participants were taught the specific types and amounts of foods they could eat, as well as foods to avoid. Initially, participants were allowed unlimited amounts of meats, poultry, fish, shellfish, and eggs; 2 cups of salad vegetables per day; 1 cup of low-carbohydrate vegetables per day; 4 ounces of hard cheese; and limited amounts of cream, avocado, olives, and lemon juice. Fats and oils were not restricted except that intake of trans fats was to be minimized. Participants were provided a 3-page handout and a handbook [11] detailing these recommendations. Participants prepared or bought all of their own meals and snacks following these guidelines.

In addition, on the day the diet was initiated, diabetes medications were reduced – generally, insulin doses were halved, and sulfonylurea doses were halved or discontinued. Due to the possible diuretic effects of the diet soon after initiation, diuretic medications were discontinued if of low dosage (up to 25 mg of hydrochlorothiazide or 20 mg of furosemide) or halved if of higher dosage. Participants were also instructed to take a standard multivitamin and drink 6–8 glasses of water daily, and were encouraged to exercise aerobically for 30 minutes at least three times per week.

Participants returned every other week for 16 weeks for further diet counseling and medication adjustment. When a participant neared half the weight loss goal or experienced cravings, he or she was advised to increase carbohydrate intake by approximately 5 g per day each week as long as weight loss continued. Participants could choose 5 g carbohydrate portions from one of the following foods each week: salad vegetables, low-carbohydrate vegetables, hard or soft cheese, nuts, or low-carbohydrate snacks. Diabetes medication adjustment was based on twice daily glucometer readings and hypoglycemic episodes, while diuretic and other anti-hypertensive medication adjustments were based on orthostatic symptoms, blood pressure, and lower extremity edema.

Participants completed take-home food records (4 consecutive days, including a weekend) collected at baseline and at weeks 2, 8, and 16 during the study. Participants were given handouts with examples of how to complete the records. A registered dietician analyzed the food records using a nutrition software program (Food Processor SQL, ESHA Research, Inc., Salem, OR).

The following measurements were made every other week: anthropometric and vital sign measurements; urine testing for ketones; and assessment for hypoglycemic episodes and other symptomatic side effects. Weight was measured on a standardized digital scale while the participant was wearing light clothes and shoes were removed. Skinfold thickness was measured at 4 sites – the average of 2 measurements at each site was entered into an equation to calculate percent body fat [12]. Waist circumference was measured at the midpoint between the inferior rib and the iliac crest using an inelastic tape; 2 measurements were averaged in the analysis. Blood pressure and heart rate were measured after the participant had been seated quietly without talking for 3 minutes. Certified laboratory technicians assessed urine ketones from a fresh specimen using the following semi-quantitative scale: none, trace (up to 0.9 mmol/L [5 mg/dL]), small (0.9–6.9 mmol/L [5–40 mg/dL]), moderate (6.9–13.8 mmol/L [40–80 mg/dL]), large80 (13.8–27.5 mmol/L [80–160 mg/dL]), large160 (>27.5 mmol/L [160 mg/dL]). Hypoglycemic episodes and symptomatic side effects were assessed by direct questioning of the participant and by self-administered questionnaires.

Blood specimens were obtained at weeks 0, 8, and 16 after the participant had fasted overnight. The following serum tests were performed in the hospital laboratory using standardized methods: complete blood count, chemistry panel, lipid panel, thyroid-stimulating hormone, and uric acid. A non-fasting specimen was also drawn at weeks 4 and 12 to monitor electrolytes and kidney function.

The primary outcome was the change from baseline to week 16 in hemoglobin A1c. Changes in all variables were analyzed by the paired t-test or Wilcoxon signed-ranks test, as appropriate. Linear regression analysis was used to examine predictors of change in hemoglobin A1c. A p value of 0.05 or less was considered statistically significant. Statistical analysis was performed using SAS version 8.02 (SAS Institute, Cary, NC).

Of the 28 participants enrolled in the study, 21 completed the 16 weeks of follow-up. Reasons for discontinuing the study included unable to adhere to study meetings and unable to adhere to the diet; no participant reported discontinuing as a result of adverse effects associated with the intervention. All but one of the 21 participants were men; 62% (n = 13) were Caucasian, 38% (n = 8) were African-American (Table ​(Table1).1). The mean age was 56.0 ± 7.9 years. 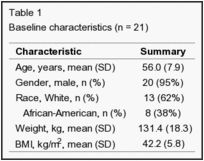 Adequate food records were available for analysis in a proportion of participants at each of the 4 timepoints (Table ​(Table2).2). Participants completed food records at a mean of 2.5 and a median of 3 timepoints. In general, comparing baseline to subsequent timepoints, mean carbohydrate intake decreased substantially and energy intake decreased moderately while protein and fat intake remained fairly constant.

Figure 1
Hemoglobin A1c for each participant. *Red line is the group mean. P value is for the mean change from baseline.

The improvement in glycemic control occurred while medications for diabetes were discontinued or reduced in most participants (Table ​(Table5).5). During the study, hypertension and hyperlipidemia medication doses were not increased from baseline nor were new agents added, except in 3 individuals. No serious adverse effects related to the diet occurred. One participant had a hypoglycemic episode requiring assistance from emergency services after he skipped a meal but the episode was aborted without need for transportation to the emergency room or hospitalization. 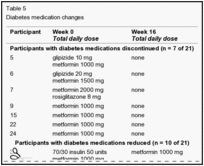 In this single-arm, 4-month diet intervention, an LCKD resulted in significant improvement of glycemia, as measured by fasting glucose and hemoglobin A1c, in patients with type 2 diabetes. More importantly, this improvement was observed while diabetes medications were reduced or discontinued in 17 of the 21 participants, and were not changed in the remaining 4 participants. Participants also experienced reductions in body weight, waist circumference, and percent body fat but these improvements were moderate and did not predict the change in hemoglobin A1c in regression analyses.

Similar to our results, three studies noted that diabetes medications were reduced in some participants[6,8,9], although details were provided in only one study. We also discontinued diuretic medications during diet initiation because of concern for additional diuresis incurred by the diet. This concern was based on the theoretical effects of the diet [17], observed effects of the diet on body water by bioelectric impedance [18], and practical experience with the diet [19]. Until we learn more about using low carbohydrate diets, medical monitoring for hypoglycemia, dehydration, and electrolyte abnormalities is imperative in patients taking diabetes or diuretic medications.

While body weight decreased significantly (-8.5 kg) in these 21 diabetic participants, the mean weight loss was less compared with what we observed in the LCKD participants of an earlier trial (-12.0 kg) [18]. Given that the diabetic participants had a higher baseline mean weight than the LCKD participants of our previous trial (131 kg vs. 97 kg), this translates into an even more dramatic disparity in percent change in body weight (-6.6% vs. -12.9%). This lesser weight loss might result from several factors. First, in the current study, most of the participants were taking insulin and/or oral hypoglycemic agents that are known to induce weight gain[20,21] Second, these same agents, particularly insulin, inhibit ketosis, which is strived for in the earliest phases of the LCKD; while it remains unclear whether ketones actually play a role in weight loss on the LCKD, previous research in non-diabetic patients has shown a positive correlation between level of ketonuria and weight loss success [22]. Lastly, compared with our previous study the participants in the current study had more comorbid illness, lower socioeconomic status, and a shorter duration of follow-up (16 weeks versus 24 weeks), all of which are associated with reduced success on any weight loss program [23].

The main limitations of our study are its small sample size, short duration, and lack of control group. That the main outcome, hemoglobin A1c, improved significantly despite the small sample size and short duration of follow-up speaks to the dramatic and consistent effect of the LCKD on glycemia. For other effects, however, such as the rises in serum LDL and HDL cholesterol, the small sample size might be the reason statistical significance was not reached. Future studies of larger samples and containing a control group are needed to better address questions about the effect of the LCKD on serum lipids in patients with type 2 diabetes.

In summary, the LCKD had positive effects on body weight, waist measurement, serum triglycerides, and glycemic control in a cohort of 21 participants with type 2 diabetes. Most impressive is that improvement in hemoglobin A1c was observed despite a small sample size and short duration of follow-up, and this improvement in glycemic control occurred while diabetes medications were reduced substantially in many participants. Future research must further examine the optimal medication adjustments, particularly for diabetes and diuretic agents, in order to avoid possible complications of hypoglycemia and dehydration. Because the LCKD can be very effective at lowering blood glucose, patients on diabetes medication who use this diet should be under close medical supervision or capable of adjusting their medication.