December 23, 2017 Comments Off on Long-term effects of a ketogenic diet in obese patients research  1

Long-term effects of a ketogenic diet in obese patients

Although various studies have examined the short-term effects of a ketogenic diet in reducing weight in obese patients, its long-term effects on various physical and biochemical parameters are not known.

In the present study, 83 obese patients (39 men and 44 women) with a body mass index greater than 35 kg/m2, and high glucose and cholesterol levels were selected. The body weight, body mass index, total cholesterol, low density lipoprotein (LDL) cholesterol, high density lipoprotein (HDL) cholesterol, triglycerides, fasting blood sugar, urea and creatinine levels were determined before and after the administration of the ketogenic diet. Changes in these parameters were monitored after eight, 16 and 24 weeks of treatment.

The present study shows the beneficial effects of a long-term ketogenic diet. It significantly reduced the body weight and body mass index of the patients. Furthermore, it decreased the level of triglycerides, LDL cholesterol and blood glucose, and increased the level of HDL cholesterol. Administering a ketogenic diet for a relatively longer period of time did not produce any significant side effects in the patients. Therefore, the present study confirms that it is safe to use a ketogenic diet for a longer period of time than previously demonstrated.

Obesity has become a serious chronic disease in both developing and developed countries. Furthermore, it is associated with a variety of chronic diseases (1–4). It is estimated that in the United States alone approximately 300,000 people die each year from obesity-related diseases (5,6). Different methods for reducing weight using reduced calorie and fat intake combined with exercise have failed to show sustained long-term effects (7–9). Recent studies from various laboratories (10,11), including our own (12), have shown that a high fat diet rich in polyunsaturated fatty acids (ketogenic diet) is quite effective in reducing body weight and the risk factors for various chronic diseases. The ketogenic diet was originally introduced in 1920 (13). In this diet, the fat to carbohydrate ratio is 5:1. While there was a significant decrease in the weight of obese patients who were on a ketogenic diet (12), the reverse occurred when the diet changed to one high in carbohydrates (14).

It should be noted that the concept that fat can be eaten ad libitum and still induce weight loss in obese subjects is not a recent one (13–33). Ketosis occurs as a result of the change in the body’s fuel from carbohydrate to fat. Incomplete oxidation of fatty acids by the liver results in the accumulation of ketone bodies in the body. A ketogenic diet maintains the body in a state of ketosis, which is characterized by an elevation of D-b-hydroxybutyrate and acetoacetate.

Mild ketosis is a natural phenomenon that occurs in humans during fasting and lactation (19,20). Postexercise ketosis is a well-known phenomenon in mammals. Although most of the changes in the physiological parameters induced following exercise revert back to their normal values rapidly, the level of circulating ketone bodies increases for a few hours after muscular activity ceases (21). It has been found that in trained individuals, a low blood ketone level protects against the development of hypoglycemia during prolonged intermittent exercise (22). In addition, ketosis has a significant influence on suppressing hunger. Thus, a ketogenic diet is a good regulator of the body’s calorie intake and mimics the effect of starvation in the body.

It is generally believed that high fat diets may lead to the development of obesity and several other diseases such as coronary artery disease, diabetes and cancer. This view, however, is based on studies carried out in animals that were given a high fat diet rich in polyunsaturated fatty acids. In contrast, our laboratory has recently shown that a ketogenic diet modified the risk factors for heart disease in obese patients (12).

Although various short-term studies examining the effect of a ketogenic diet in reducing the weight of obese patients have been carried out (10), its long-term effects in obese subjects are not known (15). Therefore, the purpose of the present study was to investigate the long-term effects of a ketogenic diet on obesity and obesity-associated risk factors in a large population of obese patients.

The prospective study was carried out at the Academic Department of Surgery, Consultation and Training Centre, Faculty of Medicine, Kuwait University (Jabriya, Kuwait) in 83 obese subjects (39 men and 44 women). The body mass index (BMI) of men and women was 35.9±1.2 kg/m2 and 39.4±1.0 kg/m2, respectively. The mean age was 42.6±1.7 years and 40.6±1.6 years for men and women, respectively. The mean age, initial height, weight and BMI for all patients are given in Table 1. Fasting blood tests were carried out for all of the subjects. Initially, all patients were subjected to liver and renal function tests, and glucose and lipid profiles, using fasting blood samples, and a complete blood count. Thereafter, fasting blood samples were tested for total cholesterol, high density lipoprotein (HDL) cholesterol, low density lipoprotein (LDL) cholesterol, triglycerides, blood sugar, urea and creatinine levels at the eighth, 16th and 24th week. In addition, weight and height measurements, and blood pressure were monitored at each visit. 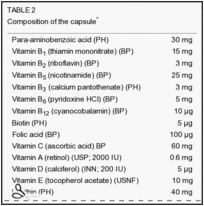 TABLE 2
Composition of the capsule*

Figure 1)
Reduction in body weight at eight, 16 and 24 weeks following the administration of the ketogenic diet in obese patients. The weights are expressed as mean ± SEM

Figure 2)
Decrease in body mass index at eight, 16 and 24 weeks during the administration of a ketogenic diet in obese patients. The values are expressed as mean ± SEM

Figure 3)
Decreased levels of total cholesterol (expressed as mean ± SEM) in obese patients at eight, 16 and 24 weeks during the administration of a ketogenic diet

Figure 4)
Changes in the level of high density lipoprotein (HDL) cholesterol in obese patients during treatment with a ketogenic diet for a period of 24 weeks. Data are expressed as mean ± SEM

Figure 5)
Changes in the level of low density lipoprotein (LDL) cholesterol during treatment with a ketogenic diet in obese patients at eight, 16 and 24 weeks. The values are expressed as mean ± SEM

Figure 6)
Changes in the level of triglycerides in obese patients during treatment with a ketogenic diet over a period of 24 weeks. The values are expressed as mean ± SEM

Figure 7)
Decreased levels of blood glucose (expressed as mean ± SEM) in obese patients at eight, 16 and 24 weeks during the administration of a ketogenic diet

Figure 9)
Changes in the level of creatinine in obese patients during a 24-week ketogenic diet. Values are expressed as mean ± SEM
Go to:

Until recently, ketosis was viewed with apprehension in the medical world; however, current advances in nutritional research have discounted this apprehension and increased public awareness about its favourable effects. In humans, ketone bodies are the only additional source of brain energy after glucose (23,24). Thus, the use of ketone bodies by the brain could be a significant evolutionary development that occurred in parallel with brain development in humans. Hepatic generation of ketone bodies during fasting is essential to provide an alternate fuel to glucose. This is necessary to spare the destruction of muscle from glucose synthesis.

One of the mechanisms of a ketogenic diet in epilepsy may be related to increased availability of beta-hydroxybutyrate, a ketone body readily transported through the blood-brain barrier. In support of this hypothesis, it was found that a ketogenic diet was the treatment of choice for glucose transporter protein syndrome and pyruvate dehydrogenase deficiency, which are both associated with cerebral energy failure and seizures (26).

One argument against the consumption of a high fat diet is that it causes obesity. The major concern in this regard is whether a high percentage of dietary fat promotes weight gain more than a low percentage of fat intake. Because fat has a higher caloric density than carbohydrate, it is thought that the consumption of a high fat diet will be accompanied by a higher energy intake (31). On the contrary, recent studies from our laboratory (12) and many other laboratories (24,32–34) have observed that a ketogenic diet can be used as a therapy for weight reduction in obese patients.

It has been found that a sugary diet is the root cause of various chronic diseases of the body. A recent study (35) showed that sugar can accelerate aging. Several recent studies (36,37) have pointed to the fact that a diet with a high glycemic load is independently associated with the development of cardiovascular diseases, type II diabetes and certain forms of cancer. Glycemic load refers to a diet of different foods that have a high glycemic index. Glycemic index is a measure of the elevation of glucose levels following the ingestion of a carbohydrate. The classification of a carbohydrate based on its glycemic index provided a better predictor of risk for coronary artery diseases than the traditional method of classification of carbohydrate into simple or complex forms (38). In other studies (38–46), it was shown that the risk of dietary glycemic load from refined carbohydrates was independent of other known risk factors for coronary diseases.

It is now evident that high carbohydrate diets increase fasting plasma triglyceride concentrations (47–51) and decrease HDL cholesterol concentrations (52–55). These changes are associated with enhanced atherogenesis (55). However, it has been shown that short-term ketogenic diets improve the lipid disorders that are characteristic of atherogenic dyslipidemia (56). It has also been found that sugary drinks decreased blood levels of vitamin E, thus reducing the amount of antioxidants in the body. It has been proven, beyond a doubt, that disrupting the oxidant-antioxidant status of the cell will lead to various diseases of the body (57).

The relation between a high fat diet and cancer is not conclusive. Recent epidemiological studies (17,58–60) could not explain a specific causal relationship between dietary fat and cancer. It has been found that altered energy metabolism and substrate requirements of tumour cells provide a target for selective antineoplastic therapy. The supply of substrates for tumour energy metabolism can be reduced by dietary manipulation (eg, ketogenic diet) or by pharmacological means at the cellular level (eg, inhibitors of glycolysis or oxidative phosphorylation). Both of these techniques are nontoxic methods for controlling tumour growth in vivo (61). Sugar consumption is positively associated with cancer in humans and test animals (58–61). This observation is quite logical because tumours are known to be enormous sugar absorbers. It has also been found that the risk of breast cancer decreases with increases in total fat intake (16). Further studies on the role of a ketogenic diet in antineoplastic therapy are in progress in our laboratory.